Our second day in D.C. was just as inspiring as the first. We began our day with a tour of Ford’s Theatre. This is the location of President Lincoln’s assassination. There is a wonderful museum downstairs that is operated by the National Park Service and they offer a very comprehensive Junior Ranger book. This museum has a vast collection of artifacts from the time of Lincoln’s presidency, his assassination, including the derringer that John Wilkes Booth used and the timeline of events that took place during this historic event. We spent well over an hour in the museum alone and then walked upstairs to the theatre. We were blessed to have a very lengthy chat with one of the docents, who was dressed up in period attire. She was a wealth of knowledge on Lincoln and his assassination and she truly made this experience memorable.

We were able to view the President’s theatre box, where the assassination took place.

We then walked across the street to the Petersen House, where Lincoln was taken after the shooting and eventually died. This house opens up to another museum that houses artifacts from President Lincolns funeral as well as memorabilia from his life. One interesting fact that we learned was that upon his death, our 16th president’s funeral train drove through 7 states and 180 cities with scheduled stops where citizens could come and pay their respects. At these stops, his coffin was displayed for mourners to view and pay tribute to this great American President. In the larger cities, thousands would line up for this historical event. The train traveled a total of 1,654 miles from the Capital to his home state of Illinois.

Later that afternoon we were blessed to have a private Capitol tour, courtesy of our Texas State Representative, Brian Babin’s, office. This tour was amazing and is now one of the most memorable parts of our D.C. trip. This is definitely a great way to see the Capitol. We met at Representative Babin’s office, across the street in the Cannon House Office Building. Here we sat down with the Representative’s staff and learned about him and his service. Wow!…we have a great Representative! Then one of his interns took us for a tour of the Capitol building via the underground tunnels. Having a staff tour proved to be even more amazing as it allowed us to tour the balcony from Speaker of the House, Paul Ryan’s office. This office most definitely has the best view in Washington…don’t you agree?

A private tour also allowed us access to the House Chamber…also known as the House Of Representative’s! Wow, were we thrilled! My husband was now most definitely pleased that he took the day off of work and made this tour with us! This Chamber is amazing. Not only is it filled with history, but this is the room where our Presidents make their State of the Union addresses, where Congress hold joint meetings and sessions and where Members count electoral votes. Yes! We were there exactly one week before the Presidential election. What a way to usher in our study of the election and government! Unfortunately cameras and cell phones are not permitted in the House Chamber, so we were unable to document this beautiful room in our photographs. What a sight though. Sitting in the seat where our Supreme Court Justices sit, gazing at the 1834 mural of President Washington and gazing up to see the words “In God We Trust” above where the Speaker Of The House sits.

The entire Capitol building is spectacular and etched in history. Here are some of our favorite photos: 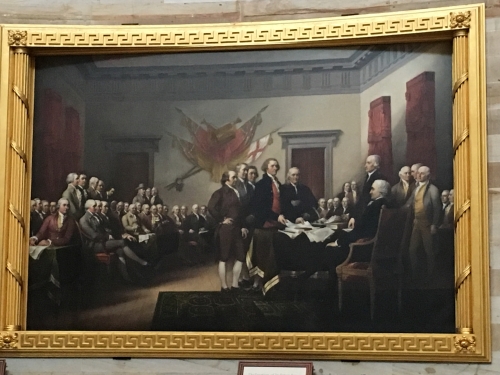